US President Donald Trump has officially launched his 2020 re-election campaign urging supporters to give his team four more years. The official launch of his re-election campaign in Florida was attended by thousands of supporters. Mr. Trump called the state his second home and used the rally to lash out at Democrats who he accused of trying to “rip your country apart”. Early polls are already placing President Trump behind some possible Democratic challengers.

During the rally, Mr. Trump entered the stage accompanied by his wife Melania. The first lady said she was “excited” to hold the position for six more years. At the rally in Florida, senior figures from the White House including Vice President Mike Pence had the chance to speak to the thousands of supporters.

While addressing the thousands of supporters, Mr. Trump repeated main themes of his wining 2016 campaign. “Tonight I stand before you to officially launch my campaign for a second term as President of the United States,” Mr. Trump told supporters. During his roughly 80-minute speech, Mr. Trump also pledged to continue the crackdown against illegal immigration. This comes a day after he tweeted that US Immigration and Customs Enforcement (ICE) would soon start removing “millions of illegal aliens” from the US. He also accused Democrats of their plan to legalize illegal immigration with the main aim of widening their voting base. 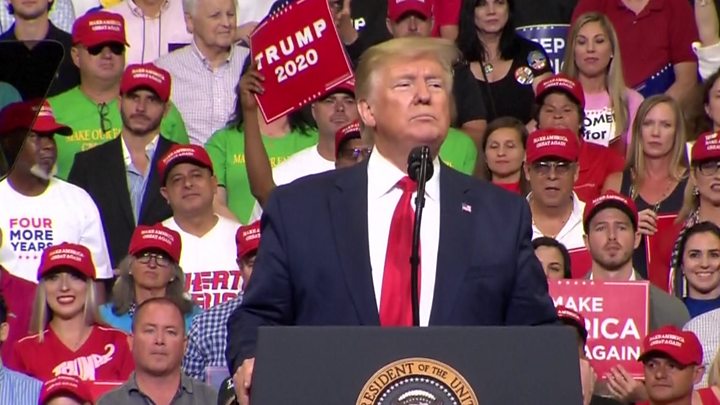 While addressing the thousands of supporters, Mr. Trump described his opponents as “radical left-wing mob” with the intention of bringing back socialism to the US.  Apart from talking politics, Mr. Trump also praised the economy while also criticizing the Muller investigation into alleged collusion between Russia and the 2016 Trump Campaign. He even went further to term the media coverings of the event as “fake news back there.”

Happenings before His Speech

Before the president’s rally, thousands of supporters had gathered outside the venue. Some of Trump’s supporters had been camping outside the Amway Center arena in Orlando since Monday morning in order to attend the rally.  As per reports,most of the voters who were in the queue listed immigration and the economy among their top concerns. President Trump is surely set to address all of these issues during his campaign.

Apart from Trump’s supporters, there were also protesters present outside the venue. The protesters also had the Baby Trump balloon that took to the skies above London when the President recently visited UK.Social media videos taken outside the venue appeared to show members of the Proud Boys, a far-right group, being stopped by the police after trying to confront anti-Trump demonstrations.

After officially announcing his 2020 re-election campaign, all eyes will be on the Democrats who are yet to choose their presidential candidate for next year’s election. The list of potential Democratic contenders is quite long and hence we only have to wait until one is chosen. It is only then that we can know who will be up against President Trump.

Are Santa Claus Letters Really Worth It?

Michale David - September 3, 2019
0
Writing letters to Santa Claus is a tradition that has been in existence for quite some time. Unfortunately, not many children receive a response...

Why You Need To Opt For Online Sports Team

Michale David - August 29, 2019
0
We are living in an era where most things are currently taking place online. Whether it is interacting with your friends or buying stuff,...

Michale David - August 24, 2019
0
When a person arrives at the site through the search for keywords that are related to your content, it shows that what you are...

Why You Need To Opt For Online Sports Team

ABOUT US
We are publishing the latest news from technology, gadgets, entertainment, travel, finance, fashion and many other niches. You can stay updated with our great portal.
Contact us: contact@nixsnantucket.com
FOLLOW US
Copyright@2019 | All Right Reserved | Nixsnantucket.com
We use cookies to ensure that we give you the best experience on our website. If you continue to use this site we will assume that you are happy with it.OkNoPrivacy policy
Revoke cookies